Amazon Elastic File System (Amazon EFS) was announced in early 2015 and became generally available in 2016. We launched EFS in order to make it easier for you to build applications that need shared access to file data. EFS is (and always has been) simple and serverless: you simply create a file system, attach it to any number of EC2 instances, Lambda functions, or containers, and go about your work. EFS is highly durable and scalable, and gives you a strong read-after-write consistency model.

Since the 2016 launch we have added many new features and capabilities including encryption data at rest and in transit, an Infrequent Access storage class, and several other lower cost storage classes. We have also worked to improve performance, delivering a 400% increase in read operations per second, a 100% increase in per-client throughput, and then a further tripling of read throughput.

Our customers use EFS file systems to support many different applications and use cases including home directories, build farms, content management (WordPress and Drupal), DevOps (Git, GitLab, Jenkins, and Artifactory), and machine learning inference, to name a few of each. 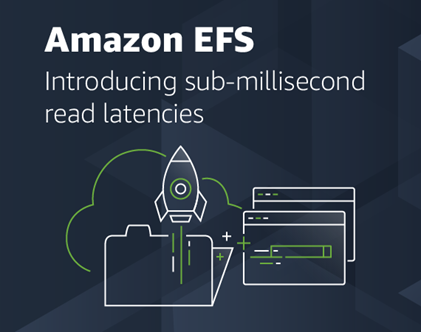 Faster is always better, and today I am thrilled to be able to tell you that your latency-sensitive EFS workloads can now run about twice as fast as before!

This performance boost applies to One Zone and Standard General Purpose EFS file systems. New or old, you will still get the same availability, durability, scalability, and strong read-after-write consistency that you have come to expect from EFS, at no additional cost and with no configuration changes.

We “flipped the switch” and enabled this performance boost for all existing EFS General Purpose mode file systems over the course of the last few weeks, so you may already have noticed the improvement. Of course, any new file systems that you create will also benefit.

PS – Our multi-year roadmap contains a bunch of short-term and long-term performance enhancements, so stay tuned for more good news!