Over the last couple of years I’ve told you about several members of the “Snow” family of edge computing and data transfer devices – The original Snowball, the more-powerful Snowball Edge, and the exabyte-scale Snowmobile.

Today I would like to tell you about the latest updates to Snowball Edge. Here’s what I have for you today:

IAM for Snowball Edge – AWS Identity and Access Management (IAM) can now be used to manage access to services and resources on Snowball Edge devices.

Let’s take a closer look at each one…

Snowball Edge Storage Optimized Update
We’ve refreshed the hardware, more than doubling the processing power and boosting data transfer speed by up to 25%, all at the same price as the older devices.

The newest Snowballl Edge Storage Optimized devices feature 40 vCPUs and 80 GB of memory, up from 24 and 48, respectively. The processor now runs at 3.2 GHz, allowing you to launch more powerful EC2 instances that can handle your preprocessing and analytics workloads even better than before. In addition to the 80 TB of storage for data processing and data transfer workloads, there’s now 1 TB of SATA SSD storage that is accessible to the EC2 instances that you launch on the device. The improved data transfer speed that I mentioned earlier is made possible by a new 100 Gigabit QSFP+ network adapter.

Here are the instances that are available on the new hardware (you will need to rebuild any existing AMIs in order to use them):

You can cluster up to twelve Storage Optimized devices together in order to create a single S3-compatible bucket that can store nearly 1 petabyte of data. You can also run Lambda functions on this and on other Snowball Edge devices.

To learn more and to order a Snowball Edge (or an entire cluster), visit the AWS Snowball Console.

AWS OpsHub for Snow Family
This is a new graphical user interface that you can use to manage Snowball Edge devices. You can unlock devices and configure devices, use drag-and-drop operations to copy data, launch applications (EC2 AMIs), monitor device metrics, and automate routine operations.

Once downloaded and installed on your Windows or Mac, you can use AWS OpsHub even if you don’t have a connection to the Internet. This makes it ideal for use in some of the mobile and disconnected modes that I mentioned earlier, and also makes it a great fit for high-security environments.

To learn more and to get started with AWS OpsHub, visit the Snowball Resources Page.

If you have applications that make calls to IAM, S3, EC2, or STS (newly available on Snowball Edge) API functions on a device, you should make sure that you specify the “snow” region in your calls. This is optional now, but will become mandatory for devices ordered after November 2, 2020.

IAM support is available for devices ordered on or after April 16, 2020.

You can now write scripts in Python or PowerShell and execute them in AWS OpsHub. The scripts can include any of the operations supported on the device. For example, here’s a simple script that restarts an EC2 instance: 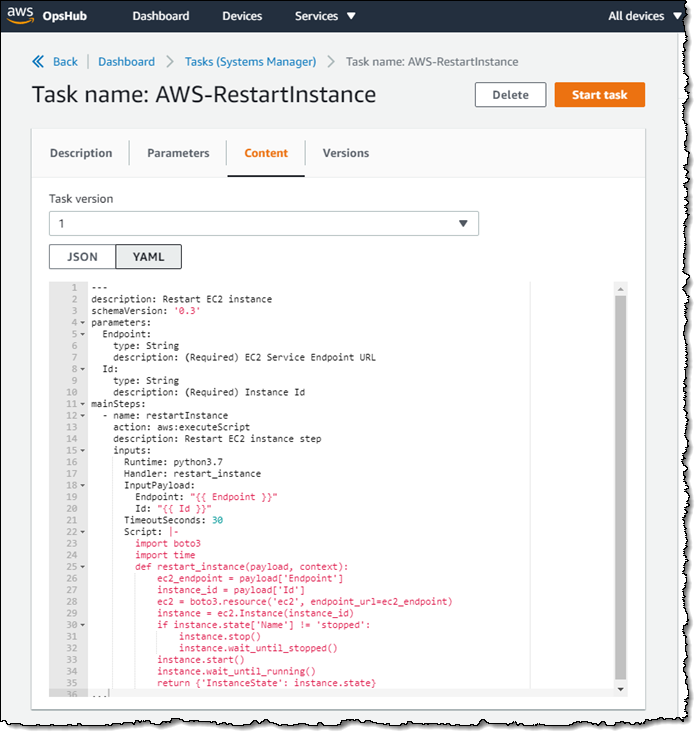