From Pets to X-as-Code: Enabling Control and Predictability for ITOps at Scale 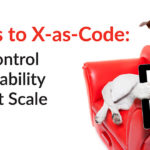 Amy Wheelus, vice president of network cloud at AT&T, recently spoke about declarative predictability at the Open Networking Summit in Antwerp. AT&T is the world’s largest telecommunications company providing mission critical communication services where people’s jobs–and lives–can be on the line. As they move away from labor-intensive IT operations toward cloud-native automation, there is a […]

The post From Pets to X-as-Code: Enabling Control and Predictability for ITOps at Scale appeared first on DevOps.com.