How We Sent an AWS Snowcone into Orbit

I have been a fan of space travel and the US space program since I was 4 or 5 years old. I remember reading about the Mercury and Gemini programs, and watched with excitement as Lunar Module Eagle landed on the Moon.

Today, with the cost to reach Low Earth Orbit (LEO) seemingly declining with each launch, there are more opportunities than ever before to push the boundaries of what we know, conducting ever-more bold experiments and producing vast amounts of raw data. Making the situation even more interesting, today’s experiments can use more types of sensors, each collecting data with higher resolution and at a greater sampling frequency. Dealing with this vast amount of data is a huge challenge. Bandwidth on NASA’s constellation of Tracking and Data Relay Satellites (TDRS) is limited, and must be shared equitably across a growing number of missions. Latency, while almost negligible from LEO, becomes a consideration when sending data from the Moon, Mars, or from beyond the bounds of the Solar System.

When we start to think about sending hardware into space, another set of challenges come about. The hardware must be as light as possible in order to minimize the cost to launch it. It must, however, be durable enough to withstand extreme vibration and G-forces during launch, and able to function in a microgravity environment once in orbit. Once in orbit, the hardware must be able to safely connect to the host spacecraft’s power, cooling, and network systems. 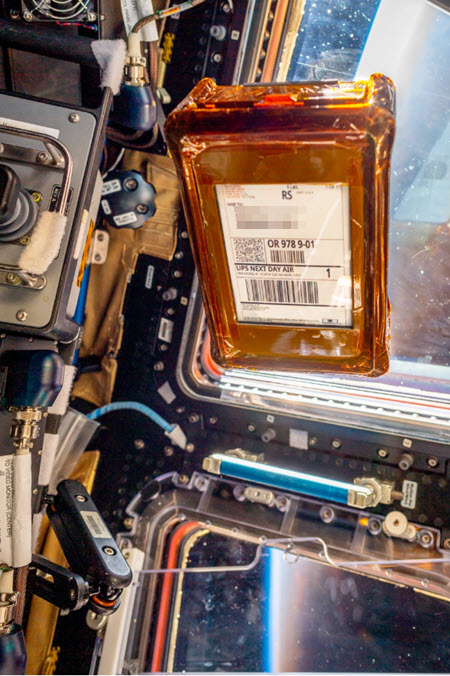 As you may have already read, we recently sent an AWS Snowcone SSD to the International Space Station. Since Amazon Prime does not currently make deliveries to the ISS, the Snowcone traveled aboard a Falcon 9 rocket as part of the first Axiom Space Mission (Ax-1). As part of this mission, four private astronauts ran experiments and conducted technology demos that spanned 17 days and 240 trips around Earth.

The Snowcone is designed to run edge computing workloads, all protected by multiple layers of encryption. After data has been collected and processed locally, the device is typically shipped back to AWS so that the processed data can be stored in the cloud and processed further. Alternatively, AWS DataSync can be used to copy data from a Snowcone device back to AWS.

On the hardware side, the Snowcone is small, exceptionally rugged, and lightweight. With 2 CPUs, 4 GB of memory, and 14 TB of SSD storage, it can do a lot of local processing and storage, making it ideal for the Ax-1 mission.

Preparing for the Journey
In preparation for the trip to space, teams from AWS, NASA, and Axiom Space worked together for seven months to test and validate the Snowcone. The validation process included a rigorous safety review, a detailed thermal analysis, and testing to help ensure that the device would survive vibration at launch and in flight to the ISS. The Snowcone was not modified, but it did end up wrapped in Kapton tape for additional electrical and thermal protection.

On the software side, the AWS Machine Learning Solutions Lab worked closely with Axiom to develop a sophisticated machine learning model that would examine photos taken aboard the ISS to help improve the crew experience in future Axiom missions. The photos were taken by on-board Nikon cameras, stored in Network Attached Storage (NAS) on the ISS, and then transferred from the NAS to the Snowcone over the Joint Station LAN. Once the photos are on the Snowcone, the model was was able to return results within three seconds.

On Board the ISS
After the Snowcone was up and running, the collective team did some initial testing and encountered a few issues. For example, the photos were stored on the NAS with upper-case extensions but the code on the Snowcone was looking for lower-case. Fortunately, the Earth-based team was able to connect to the device via SSH in order to do some remote diagnosis and reconfiguration.

An updated ML model became available during the mission. The team was able to upload a largish (30 GB) AMI to the Snowcone and put the model into production with ease.

The Snowcone remains aboard the ISS, and is available for other experiments through the end of 2022. If you are a researcher, student, or part of an organization that is interested in performing experiments that involve processing data remotely on the ISS, you can express your interest at Snowcone-Inquiry@axiomspace.com. One interesting use case should be of interest to medical researchers. Many of the medical measurements and experiments conducted on the ISS generate data that must currently be downloaded to Earth for processing and analysis. Taking care of these steps while in orbit could reduce the end-to-end time for downloading and analysis from 20 hours to just 20 minutes, creating the potential for a 60-fold increase in the number of possible experiments.

Success
Net-net, the experiment showed that it is possible to extend cloud computing to the final frontier.

The Earth-based team was able to communicate remotely with the orbiting Snowcone in order to launch, test, and update the model. They then demonstrated that they were able to repeat this process as needed, processing photos from onboard research experiments and making optimal use of the limited bandwidth that is available between space stations and Earth.

All-in-all, this experiment was deemed a success, and we learned a lot as we identified and addressed the challenges that arise when sending AWS hardware into space to serve the needs of our customers.

Check out AWS for Aerospace and Satellite to learn more about how we support our customers and our partners as they explore the final frontier. If you are ready to deploy a Snowcone on a space or an Earth-bound mission of your own, we are ready, willing, and able to work with you!