Earlier this year I told you about the AWS Nitro System and promised you that it would allow us to “deliver new instance types more quickly than ever in the months to come.” Since I made that promise we have launched memory-intensive R5 and R5d instances, high frequency z1d instances, burstable T3 instances, high memory instances with up to 12 TiB of memory, and AMD-powered M5a and R5a instances. The purpose-built hardware and the lightweight hypervisor that comprise the AWS Nitro System allow us to innovate more quickly while devoting virtually all of the power of the host hardware to the instances.

We acquired Annapurna Labs in 2015 after working with them on the first version of the AWS Nitro System. Since then we’ve worked with them to build and release two generations of ASICs (chips, not shoes) that now offload all EC2 system functions to Nitro, allowing 100% of the hardware to be devoted to customer instances. A few years ago the team started to think about building an Amazon-built custom CPU designed for cost-sensitive scale-out workloads.

AWS Graviton Processors
Today we are launching EC2 instances powered by Arm-based AWS Graviton Processors. Built around Arm cores and making extensive use of custom-built silicon, the A1 instances are optimized for performance and cost. They are a great fit for scale-out workloads where you can share the load across a group of smaller instances. This includes containerized microservices, web servers, development environments, and caching fleets.

The A1 instances are available in five sizes, all EBS-Optimized by default, at a significantly lower cost:

I was lucky enough to get early access to some A1 instances in order to put them through their paces. The console was still under construction so I launched my first instance from the command line:

The instance is up and running in seconds; I can run uname to check the architecture: 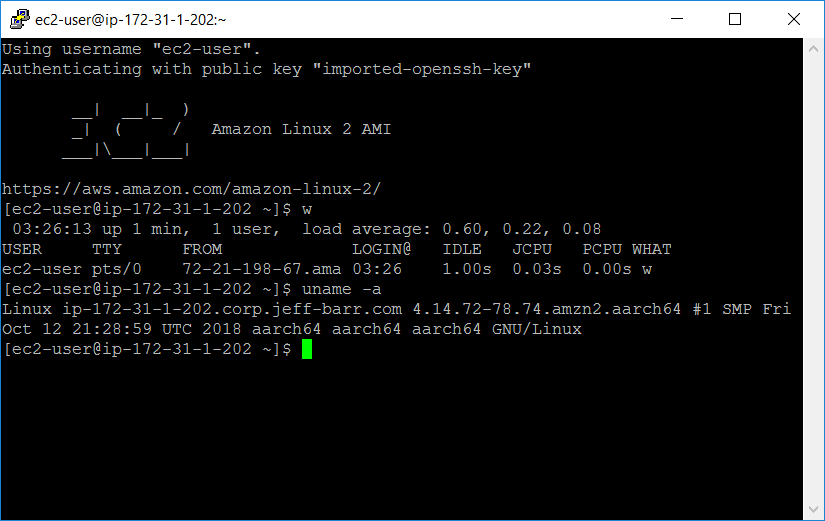 AMIs are available for Amazon Linux 2, RHEL, and Ubuntu today, with additional operating system support on the way.

Available Now
The A1 instances are available now in the US East (N. Virginia), US East (Ohio), US West (Oregon), and Europe (Ireland) Regions in On-Demand, Reserved Instance, Spot, Dedicated Instance, and Dedicated Host form and you can launch them today.