Running a complex network is not an easy job. In addition to simply keeping it up and running, you need to keep an ever-watchful eye out for unusual traffic patterns or content that could signify a network intrusion, a compromised instance, or some other anomaly.

Detect Network & Security Anomalies – You can extract traffic of interest from any workload in a VPC and route it to the detection tools of your choice. You can detect and respond to attacks more quickly than is possible with traditional log-based tools.

Gain Operational Insights – You can use VPC Traffic Mirroring to get the network visibility and control that will let you make security decisions that are better informed.

Implement Compliance & Security Controls – You can meet regulatory & compliance requirements that mandate monitoring, logging, and so forth.

Troubleshoot Issues – You can mirror application traffic internally for testing and troubleshooting. You can analyze traffic patterns and proactively locate choke points that will impair the performance of your applications.

You can think of VPC Traffic Mirroring as a “virtual fiber tap” that gives you direct access to the network packets flowing through your VPC. As you will soon see, you can choose to capture all traffic or you can use filters to capture the packets that are of particular interest to you, with an option to limit the number of bytes captured per packet. You can use VPC Traffic Mirroring in a multi-account AWS environment, capturing traffic from VPCs spread across many AWS accounts and then routing it to a central VPC for inspection.

Mirror Source – An AWS network resource that exists within a particular VPC, and that can be used as the source of traffic. VPC Traffic Mirroring supports the use of Elastic Network Interfaces (ENIs) as mirror sources.

Mirror Target – An ENI or Network Load Balancer that serves as a destination for the mirrored traffic. The target can be in the same AWS account as the Mirror Source, or in a different account for implementation of the central-VPC model that I mentioned above.

Traffic Mirror Session – A connection between a mirror source and target that makes use of a filter. Sessions are numbered, evaluated in order, and the first match (accept or reject) is used to determine the fate of the packet. A given packet is sent to at most one target.

You can set this up using the VPC Console, EC2 CLI, or the EC2 API, with CloudFormation support in the works. I’ll use the Console.

I already have ENI that I will use as my mirror source and destination (in a real-world use case I would probably use an NLB destination):

The MirrorTestENI_Source and MirrorTestENI_Destination ENIs are already attached to suitable EC2 instances. I open the VPC Console and scroll down to the Traffic Mirroring items, then click Mirror Targets: 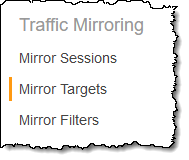 I enter a name and description, choose the Network Interface target type, and select my ENI from the menu. I add a Blog tag to my target, as is my practice, and click Create: 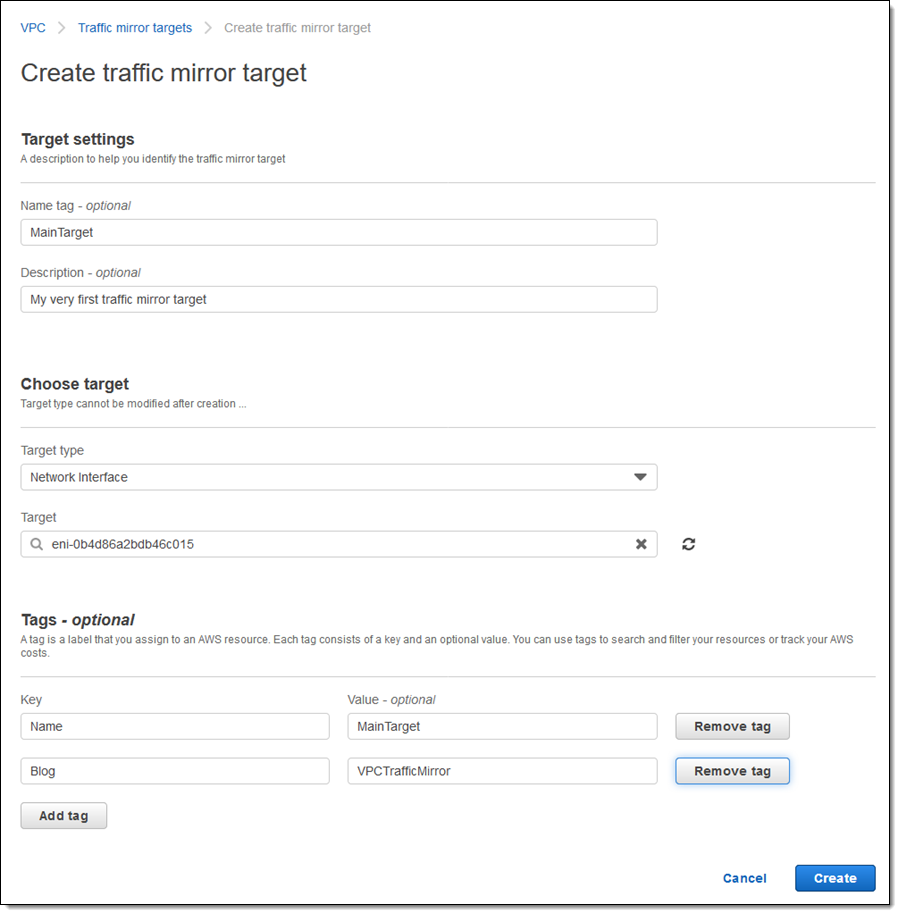 My target is created and ready to use:

Now I click Mirror Filters and Create traffic mirror filter. I create a simple filter that captures inbound traffic on three ports (22, 80, and 443), and click Create: 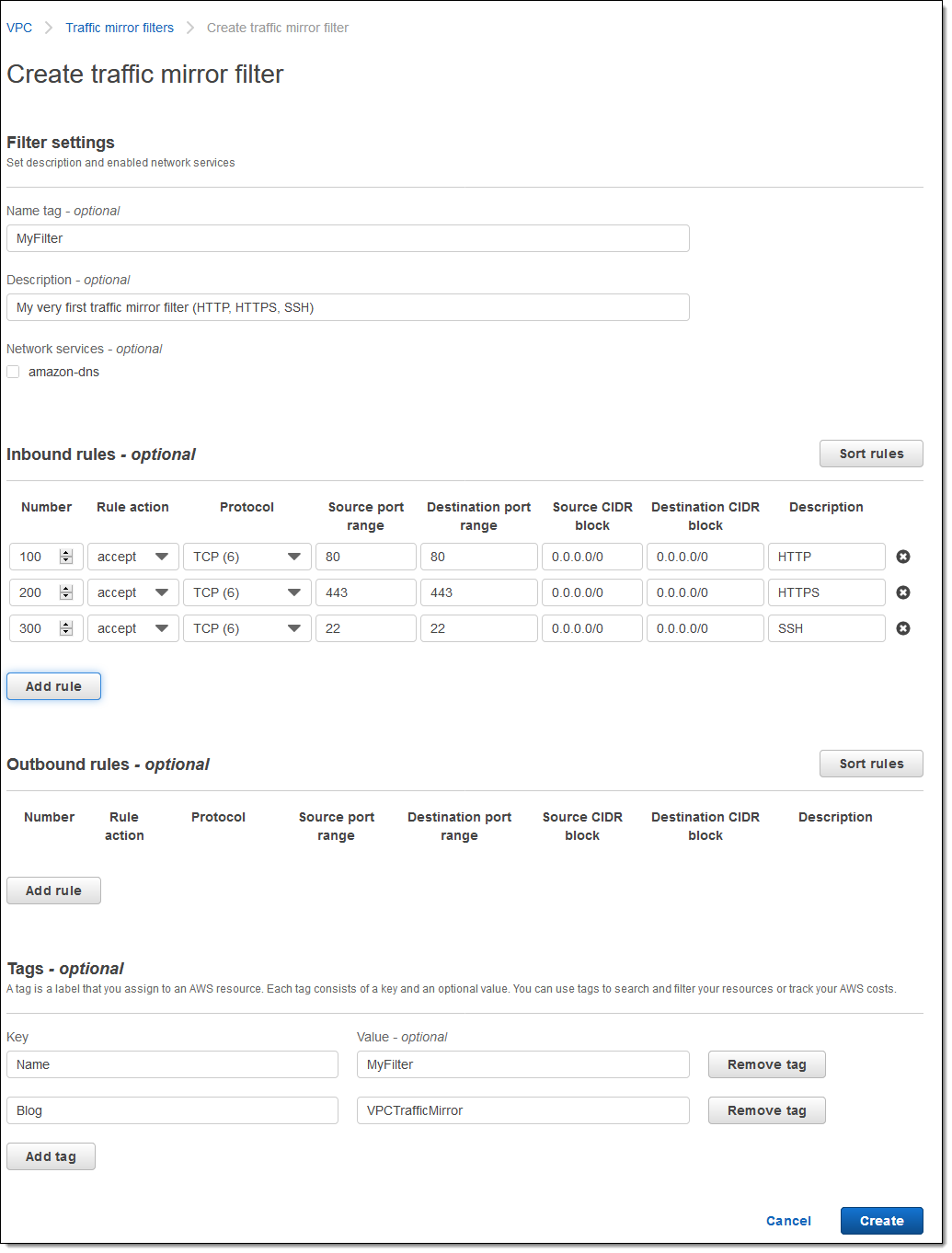 Again, it is created and ready to use in seconds:

Next, I click Mirror Sessions and Create traffic mirror session. I create a session that uses MirrorTestENI_Source, MainTarget, and MyFilter, allow AWS to choose the VXLAN network identifier, and indicate that I want the entire packet mirrored: 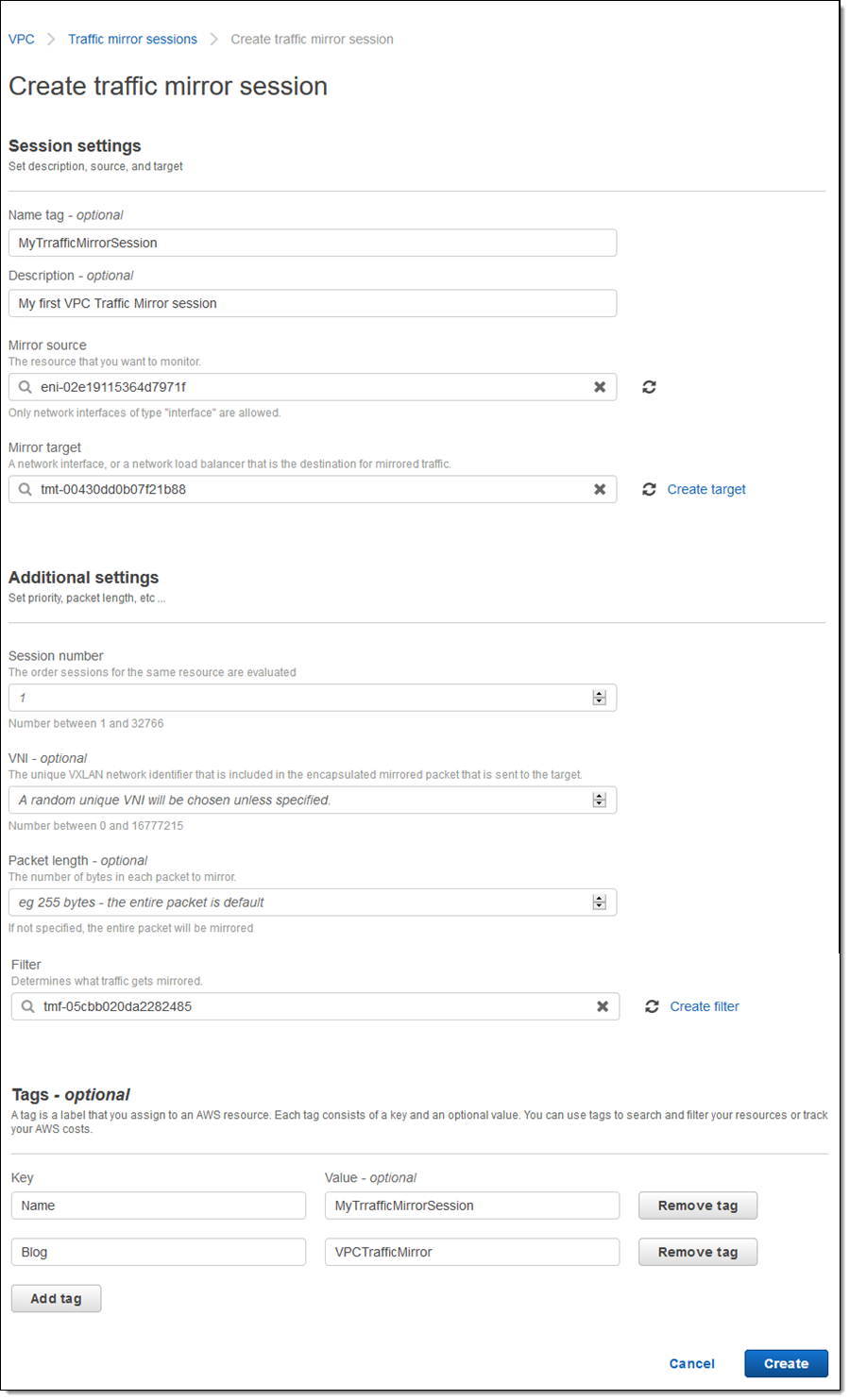 And I am all set. Traffic from my mirror source that matches my filter is encapsulated as specified in RFC 7348 and delivered to my mirror target. I can then use tools like Suricata to capture, analyze, and visualize it.

Things to Know
Here are a couple of things to keep in mind:

Sessions Per ENI – You can have up to three active sessions on each ENI.

Cross-VPC – The source and target ENIs can be in distinct VPCs as long as they are peered to each other or connected through Transit Gateway.

Scaling & HA – In most cases you should plan to mirror traffic to a Network Load Balancer and then run your capture & analysis tools on an Auto Scaled fleet of EC2 instances behind it.

Bandwidth – The replicated traffic generated by each instance will count against the overall bandwidth available to the instance. If traffic congestion occurs, mirrored traffic will be dropped first.

Now Available
VPC Traffic Mirroring is available now and you can start using it today in all commercial AWS Regions except Asia Pacific (Sydney), China (Beijing), and China (Ningxia). Support for those regions will be added soon. You pay an hourly fee (starting at $0.015 per hour) for each mirror source; see the VPC Pricing page for more info.