The Battle for End-to-End DevOps Champion Is On 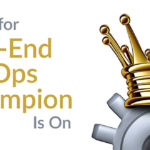 This past week’s CollabNet/Xebia Labs merger brings another challenger to the “end-to-end” DevOps market. There is a huge prize waiting for the winner. But which of the challengers has the right stuff to win this battle? Will any of the current pack even be around at the end of the day? Who will be the […]

The post The Battle for End-to-End DevOps Champion Is On appeared first on DevOps.com.